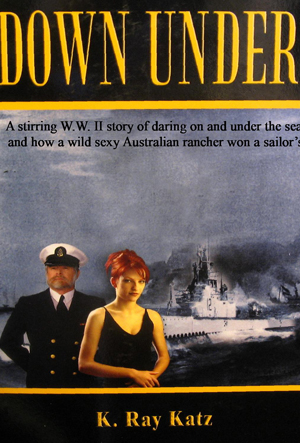 Down Under is a voyage of discovery and danger as Bill Cullison, a new submarine commander travels from New London to Cape Town, Manila and beyond as Pearl Harbor is bombed. Invited to a dinner as his boat, the Angler makes a port call in Cape Town, Cullison meets Dusty a vivacious red head. She is on a ship traveling home from England to Australia where she has a cattle station in the outback. After spending a day on a lonely beach they look forward to meeting again.

With the beginning of the war Cullison must take his boat into the dangerous and lonely Red Sea to attack a German outpost as a mechanical problem becomes more severe.

Later, nearing the Philippines Cullison has the opportunity of attacking a Japanese convoy and manages to escape their savage response using unorthodox strategy. His request to sail south away from the Philippines is denied and he must take a valuable cargo to safety even as his mechanical problem prevents his sub from submerging.

He looks forward to meeting Dusty in Australia only to find that her passenger ship has been torpedoed. She comes ashore dazed and bruised. Cullison takes her to a seaside cabin to recover and then to her cattle station only to be beset with unexpected problems on the trip before they can squeeze into her single bed while her housekeeper lectures on the wages of sin.

Back at sea, Cullison is ordered to shadow an enemy invasion fleet and then make an attack in a restricted anchorage where the Japanese are able to give as good as they get. The Angler is hit by enemy gunfire leaving survival and return to Dusty in doubt.