Jeffrey S. Trosin has been a casino table games dealer since 2000 and has dealt in Detroit, MI, Las Vegas, NV on the strip and Henderson, NV. Over the span of his career, he has amassed many stories while dealing blackjack, minibac, roulette and many other games. He also has experience dealing in high limit.

During his time in the Navy, Jeff’s ship deployed for six weeks and teamed up with the Coast Guard, tracking down drug runners in the Caribbean. He has flown the simulators that the F-14 pilots were once trained on and even though he never aspired to be a Navy SEAL, he did some training with them in fighting techniques and survival skills.

He has taken the English placement exams at Devry University and the College of Southern Nevada where he scored 100% on each. He has been writing songs and playing lead guitar for 38 years.

Jeff wrote a novel based on his dealing stories. Instead of just telling the stories, he has created a storyline around them in which his personality resonates in the dealer, Jake Brennen, who is portrayed in the planned series of three novel entitled The Casino Dealer.

The first edition, Abduction is available on Amazon and Jeff is working diligently on the second in the series, Fate Lingers. He has formulated the storyline for the third novel, but not a title.

While tackling the project of writing the novels, Jeff has discovered a new passion as an author.

Find Jeffrey on the Web: 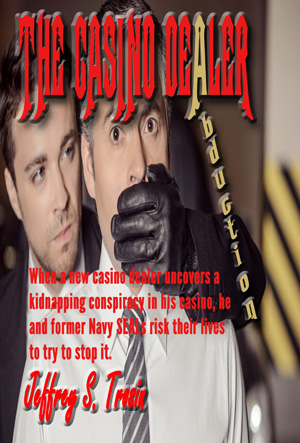